INDEPENDENCE – Decades of last-minute pins, roaring crowds, and unlikely victories support one of Iowa’s best traditions – wrestling. Here in Independence, there is no exception.

At Independence, a 67-year tradition of excellence in wrestling was established over time through dedicated athletes and coaches. Most recently, head coach Michael Doyle and his coaching staff have helped contribute to the program’s success.

As the State got closer and closer, Doyle says keeping the wrestlers relaxed and focused was high on his list of priorities.

“At state, there’s more stress and pressure, the matches are closer, the kids are more talented,” said Doyle. “Telling them to take things one match at a time and try to relax between matches or competitions is easy to say, but hard to do. I think if our athletes do that, it puts them in a better position to achieve their goals.” 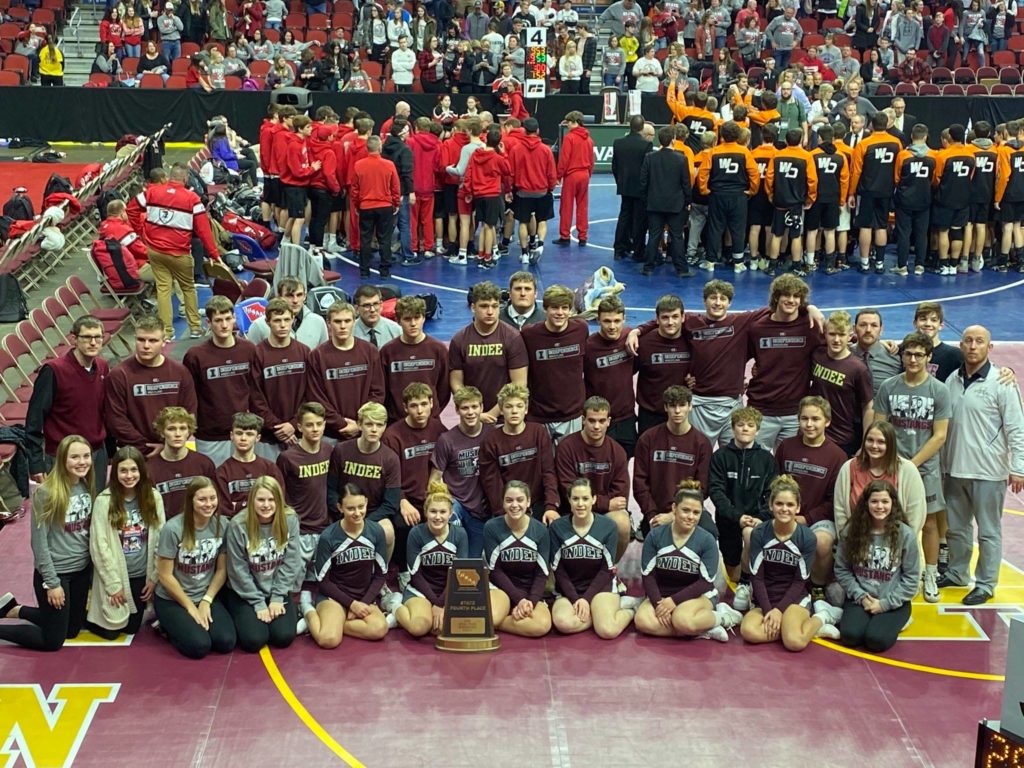 All of that success did not go unnoticed. Coaches and officials statewide named Coach Michael Doyle Iowa’s Class 2A Coach of the Year. Doyle was also honored with Coach of the Year in 2009. In both cases, he says the community deserves all the credit.

“It’s a great honor, and it’s nice to know that your peers recognize your hard work and the time and effort that go into it,” said Doyle. “It’s something I’m proud of personally, but it’s also great for our community. It’s not all about Michael Doyle, it’s about our community. We have such a supportive community and administration, and Coach of the Year is just a byproduct of that.”

Athletic Director Justin Putz commends Doyle for putting Independence’s wrestling program on the map year after year, and the time and effort it takes to do so.

“Coach Doyle and his staff do a great job with our wrestling program,” said Putz. “Year in and year out, his program is one of the most competitive in the state. This year they finished fourth as a team at dual state, and had 3 medalists and 2 finalists – much of that success is due to the work, knowledge, and dedication of Coach Doyle and his staff. We are lucky to have him as a part of our athletic department.” 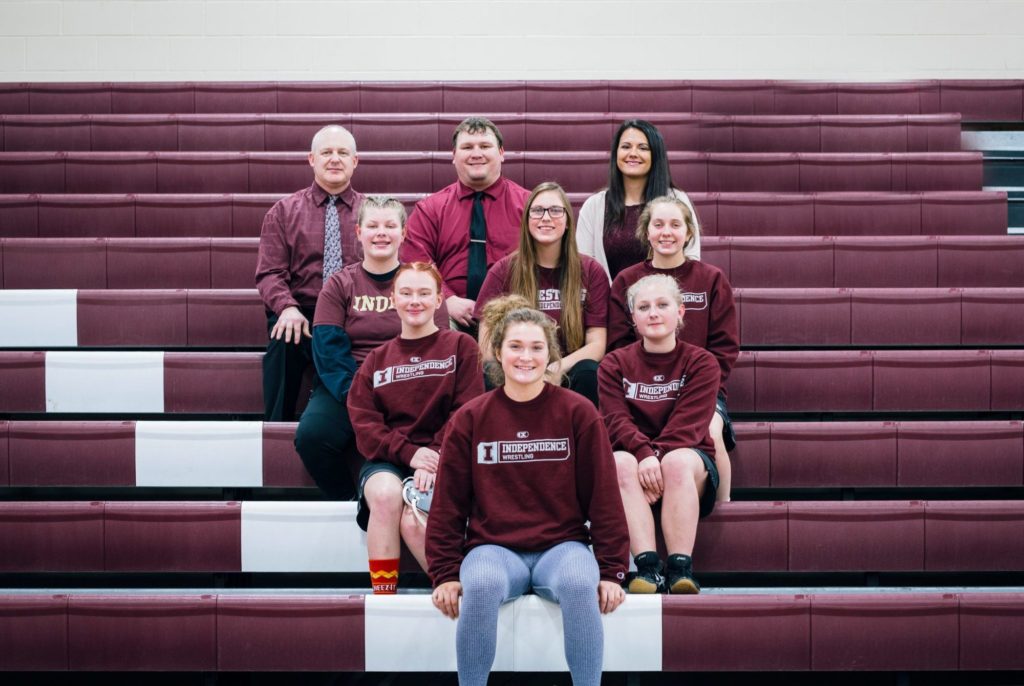 This year was also the first time in the program’s history in which a girls’ team participated during the season, which included five duals at the Battle of Waterloo and wrestling in the Girls State Tournament. Kenzie Fischels and Rachel Eddy became Independence’s first two Girls State Place winners, both capping off their seasons with an impressive second place finish.

“The girls’ team really started from scratch with interest from Rachel Eddy,” said Doyle. “So once we got more girls interested, we started practicing, and had 14 girls practicing at one point. We sent seven girls to the Girls State Tournament, and having two of the 10 weight classes represented by Independence in the finals was great.”

Assistant coaches Matthew Shannon and Garry Anderson were recognized by CBS2 as Ed Thomas Coaches of the Week for their work with the girls’ team.

Doyle says there are several factors that made this year’s team unique, adding that their willingness to learn helped contribute to their success.

“I think this group of athletes was really coachable,” said Doyle. “They wanted to get better and learn more, and the work ethic of these students was outstanding. They came in every day and were willing to work and get better.”

Doyle also says leadership from the team’s seniors helped set an example for younger wrestlers on the team. He hopes that tradition continues as this year’s seniors graduate.

“We had really good senior leadership this year,” said Doyle. “Matthew Doyle, Cole Davis, and Christian Kremer are all great examples of student athletes here at Independence not just as wrestlers, but in general. They work hard in everything they do.” 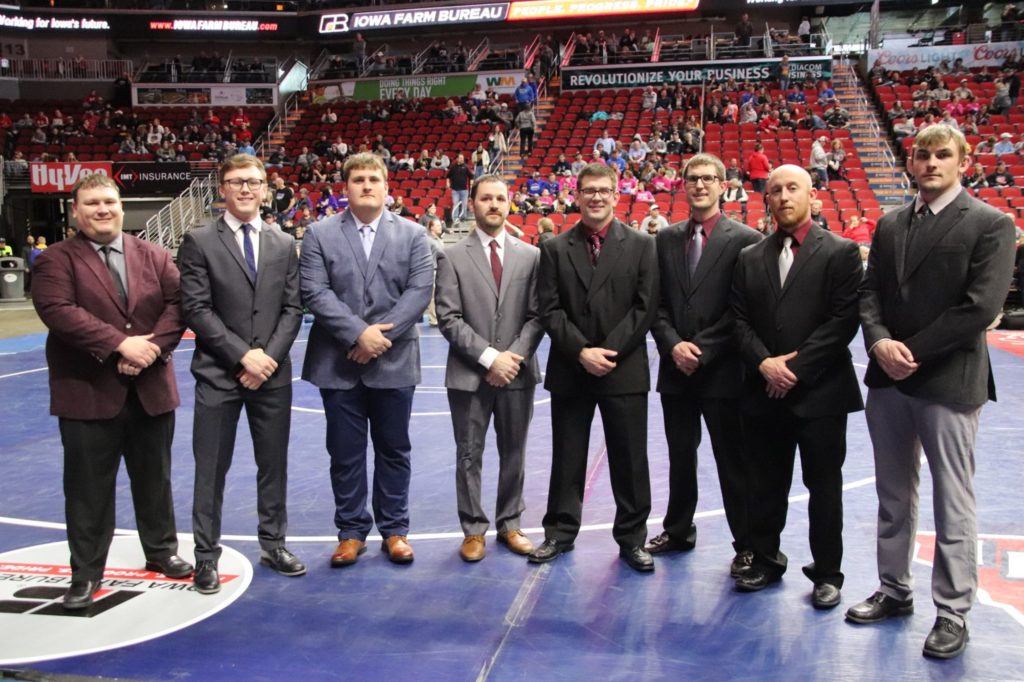 Even with a strong willingness to learn and great team leadership, the team still faced some tough obstacles this season. Doyle says staying positive and addressing issues head on help them get through.

“Every time a team faces adversity, it’s for a lot of different reasons,” said Doyle. “But I think the biggest thing is you just stick to it, keep doing what you’ve been doing, and keep trying to fine tune the things you can control. I want our athletes to know that adversity happens, and that we’ll get past it, learn from it, and grow from it.”

Looking ahead to next season, Doyle hopes the team can build on the success this season brought.

Doyle knows getting there will require lots of hard work throughout the offseason. He says he encourages his athletes to stay active and involved in the spring and summer months to set them up for success.

“I tell them they can’t put their wrestling shoes away and pull them out next year when November rolls around, you have to know where they’re at and put them on every now and again,” said Doyle. “I think if we get our athletes to focus on what they’re capable of doing, hopefully they can put in some time in the offseason and put themselves in a good position to do well next year.”

Keeping up Independence’s wrestling tradition in the years to come is no easy feat, but Doyle says a supportive community, coaching staff, and administration is all it takes.

“We have a great support system that really works and helps us put ourselves in a position for success,” said Doyle.

As long as hard work and determination continue to define this program, Doyle hopes he can continue to bring success to the Independence community for years to come.

“It’s a lot of work for our athletes and their parents, but you can’t get anywhere without participating, getting involved, and putting in some effort,” said Doyle. “I think coaching is the same way. You might look at what we did this year and you might think, ‘oh, looks like Coach Doyle has everything he needs,’ but there are always things I can do better and improve on. It’s about reflecting and growing, trying to improve on things as much as you can, and working hard to get there.”